Understanding Constructive Knowledge in a Slip and Fall 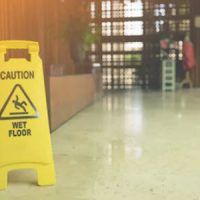 Unfortunately for the plaintiff, the court ultimately determined that none of facts of the slip and fall incident suggested that the grape and surrounding liquid were on the ground for enough time to impute constructive knowledge to Winn-Dixie. In particular, it pointed to the fact that:

Based on these facts, the court found that the plaintiff had failed to meet her burden. Therefore, it affirmed the motion for summary judgment that had been granted in favor of Winn-Dixie.

What is the Law in Florida?

There is a common misconception that simply falling in a location means that the business or entity will automatically be held liable. But unfortunately, as illustrated in the example above, every slip and fall does not warrant the same kind of compensation. It is important to understand that the commercial slip and fall law here in Florida generally requires a showing that the business establishment had actual knowledge or constructive knowledge of the dangerous condition and should have taken action to remedy it. Because actual knowledge is typically difficult to demonstrate, most plaintiffs including the one in Oliver instead seek to show that a business had constructive knowledge which may be proven by circumstantial evidence. This is proven by showing that either:

You may have a premises liability claim if you or a loved one has been injured in a slip and fall accident. As the premises liability attorneys at Leifer Law Firm with offices in Boca Raton, Fort Lauderdale and West Palm Beach, we can analyze the facts of your case and advise you of the best route to ensure that you don’t slip in your pursuit of the benefits that you deserve. Contact us today to begin.

By Leifer Law Firm | Posted on June 3, 2020
« Staying Safe When Visiting Florida as a Tourist
The Dangers of T-Bone Accidents »