How Long Must A Safety Hazard Exist For A Store Owner To Have “Constructive” Knowledge? 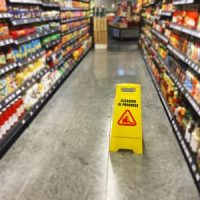 The key to any premises liability lawsuit is establishing the property owner had “actual or constructive knowledge” of the safety hazard that injured the customer. For example, if you are injured in a slip-and-fall accident caused by spilled water on a supermarket aisle, you need to show that the management either knew the spill existed prior to your fall (actual knowledge), or that the spill had been around long enough that management should have known something was wrong (constructive knowledge).

But just how long is long enough to establish constructive knowledge? A recent decision from a federal judge in Miami, Hernandez v. Sam’s East, Inc., offers some guidance on this subject. In this case, the plaintiff was shopping at a Wal-Mart in Miramar, Florida. While walking down the produce aisle, the plaintiff slipped and fell on a “transitory liquid substance.” She subsequently sued Wal-Mart for damages.

Wal-Mart successfully moved to have the case dismissed. The company argued it lacked constructive knowledge of the spilled liquid prior to the plaintiff’s fall. The judge agreed there was “no evidence” that the store’s management could have reasonably known about the hazard beforehand.

The judge explained that under Eleventh Circuit case law, which applies to federal cases in Florida, constructive notice “is established when the hazard exists for a sufficient period of time that a defendant should have eliminated the danger.” Florida state courts have further elaborated that “15 to 20 minutes is a sufficient amount of time to charge a premise’s owner with constructive knowledge of a dangerous condition.” And in cases where the dangerous condition has existed for “10 minutes or less,” that is insufficient to establish constructive knowledge.

Slip-and-fall cases often turn on establishing highly specific factual timelines. That is why it is crucial to consult with an experienced Boca Raton premises liability attorney as soon as possible following an accident. The longer you wait, the more likely you are to forget or overlook crucial details. So if you need to speak with a lawyer today, Contact Leifer & Ramirez to schedule a free consultation.

By Leifer & Ramirez | Posted on July 9, 2021
« When Is The Rear Driver Not Legally Responsible For A Rear-End Accident?
Does Florida Law Still Apply If You Are Injured While Driving In Another State? »