When Is The Rear Driver Not Legally Responsible For A Rear-End Accident? 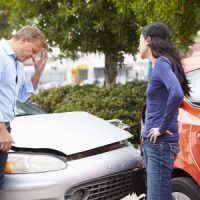 In rear-end car accidents, the rear driver is usually at fault. Florida law actually imposes a presumption of negligence on rear driver defendant in these situations. There are, however, ways a defendant can rebut this presumption, such as they can prove they suffered a “sudden and unexpected loss of consciousness,” which left them incapable of avoiding the accident.

Whether a defendant did, in fact, suffer a loss of consciousness is typically a question of fact for a jury to decide. A recent decision from the Florida Third District Court of Appeals, Hernandez v. Mishali, provides an apt illustration. In this case, the defendant was driving his ex-girlfriend to her father’s house. While driving, the defendant told his passenger that “he was feeling strangely hot and weird.” The defendant said he continued to drive but had no memory of what happened next.

What did happen was the defendant sped through a school zone and crashed into the rear of a minivan with five people, including two children, inside. The minivan passengers sustained serious injuries. For his part, the defendant was unconscious at the scene. Emergency room doctors later diagnosed the defendant with syncope, the medical term for fainting.

The minivan passengers (the plaintiffs) subsequently filed a personal injury lawsuit against the defendant. The case was split into separate liability and damages phases. During the trial on liability, the defense called the defendant’s neurologist and his ex-girlfriend, who both offered testimony suggesting the defendant might have suffered a “sudden and unexpected loss of consciousness” just before the collision. The plaintiffs urged the jury to reject this defense, pointing to the defendant’s own testimony that he “felt something” several miles before the accident yet did not stop driving or otherwise try to avoid a crash. The plaintiffs also noted the defendant never said he actually lost consciousness before the accident, only that he could not remember how it happened afterward.

The jury agreed with the plaintiffs and held the defendant was negligent in causing the accident. The defendant then asked the judge for a directed verdict–essentially, to set aside the jury’s verdict and hold him not legally responsible for the accident. For some reason, this motion remained pending before the court for several months, during which time a new judge took over the case. The new judge, who was not present during the trial, decided to grant the defense’s motion, prompting the plaintiffs to appeal.

The Third District reinstated the jury’s original verdict. The appellate court explained that a judge should only set aside a jury verdict when there is no “competent evidence” supporting its conclusions. That was not the case here. Even if the new judge believed that the defendant may have suffered a sudden loss of consciousness just before the accident, the jury nevertheless heard and properly considered evidence to the contrary. As such, it was entitled to find the defendant caused the accident through his own negligence.

If you have been injured in a car accident, it is important to seek timely legal advice regarding your rights. Contact the Boca Raton auto accident lawyers at the Leifer Law Firm today to schedule a free case evaluation.

By Leifer Law Firm | Posted on July 7, 2021
« Does A Judge Have To Remove A Juror From A Personal Injury Case Due To Preexisting Bias?
How Long Must A Safety Hazard Exist For A Store Owner To Have “Constructive” Knowledge? »