[Infographic] The Top 10 Controversies of Red Light Cameras in Florida 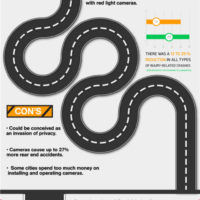 Red light cameras are some of the most recent technology being deployed to capture those who choose to break road rules, but they have also raised a lot of controversy regarding issues like their cost and privacy. Read on to learn more about red light cameras in Florida, the questions raised by their use, and what you should do if you have been accused.

Within thirty days after the alleged red light violation, you’ll get a Notice of Violation in the mail. From here, you have two options:

On the ticket, you’ll also notice some identifying information about your case, including a video and two photos. You should always request to see this information if you have received a Notice of Violation. You have 60 days to do this. If you elect to pay the ticket, aside from your money disappearing, it’s like the whole incident never happened.

If you ignore the Notice of Violation above or elected to contest the ticket, then you’ll receive a Florida Uniform Traffic Citation Ticket to pay within 60 days. This amount can double if you don’t pay within the deadline, and your account is turned over to collections.

The receipt of this second document triggers another 30 day period to contestant it. At this point, if you pay the fine, you will have a conviction on your driving record. This is a point of no return, because you cannot go back to pay the initial Notice of Violation.

If this has happened to you, it’s wise to retain a Florida traffic ticket attorney to help explore the circumstances of the ticket. Your attorney will most likely request a court date and fight for the dismissal of the ticket.

There are three primary defenses for a red light camera ticket. One of them may be applicable to your case:

As mentioned in the introduction to this article, this technology has earned quite a bit of criticism. In fact, in September 2015, North Miami officials announced plans to remove all red light cameras, and this is just the latest local area to nix their program. Boynton Beach officials threw out a batch of red light camera tickets earlier this year, too.

Some of the most common claims about red light cameras includes all of the following concerns:

Cameras are an invasion of privacy: With the majority of these systems across the country, a video feed is running around the clock. This means that all drivers, not just those running red lights, are being captured on video.

Without a clear audit trail of what’s happening to the data captured from the video, many people believe this is an obvious violation of privacy.

There are no witnesses to the violation: There’s no guarantee of delivery for a red light camera ticket, and it’s unlike a traffic ticket received from a police officer where you have had the opportunity to interact with the entity accusing you.

3. Ticket Recipients Are Not Quickly Notified of the Offense

A red light camera citation will arrive weeks after the alleged incident, making it difficult for the accused person to even remember the circumstances of that day.

Another concern is that someone could accumulate multiple tickets within a short period and not have any warning about the mounting fees.

Many municipalities use a program known as traffic light synchronization to help decrease pollution and congestion. Unneeded lights or lights near low-traffic areas might be partially deactivated during certain times, but the presence of a 24/7 red light camera causes issues with this.

5. Red Light Cameras Do Nothing to Stop other Reckless Driving Behavior

Even if a camera accurately catches someone who runs the light, it does little to discourage a motorist going through a green light at reckless speed. If a police officer is not present to witness either scenario, only the red light runner gets penalized.

6. No Guarantee of Delivery

There’s no guarantee that the offender received the violation. Since first class USPS mail is used to send the tickets to the alleged offender, there is no verified way to prove that the accused ever received it.

The fact that an unpaid violation could be sent to collections or lead to an arrest warrant without verified delivery troubles many opponents of red light cameras.

Even if the camera was installed properly, this is not a guarantee that the camera was still operating properly at the time it captured an alleged violation.

8. Cameras Do Nothing to Prevent Accidents and May Even Cause Them

9. Cameras Might Be Used to Boost Revenue Rather Than Drive Improved Safety

10. The Existence of the Cameras Seems to Violate Current State Law

The fact that current state law only empowers a law enforcement officer to issue a ticket was the grounds for the dismissal of the more than $6.3 million in violations in Florida earlier this year.

One can clearly see that there is a lot of controversy surrounding the costs and consequences of red light cameras—not to mention a great deal of research that goes into defending a red light camera case. For help in contesting your red light ticket, contact an attorney as soon as possible.

By Leifer & Ramirez | Posted on November 24, 2015 Tags: can you fight a red light camera ticket in florida
« How Do I Choose a Personal Injury Lawyer in Florida?
When Is the Worst Time to Visit a Personal Injury Attorney? »