Can Someone Other Than A Property Owner Be Held Responsible For A Slip And Fall Accident? 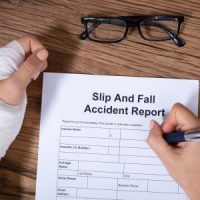 Slip-and-fall accidents usually fall under the broader category of “premises liability” claims. This refers to the legal obligation of anyone who owns or controls a premises to keep the property in reasonably safe condition for invited guests. Note that a party may exercise “control” over the property for purposes of premises liability without necessarily having ownership.

Restaurant Faces Trial Over Pedestrian Who Tripped on Sidewalk

In some cases, disputes over ownership and control can make a premises liability lawsuit more complex to pursue. Take this recent decision from the Florida Second District court of Appeal, City of Naples v. Chops City grill, Inc.. This is an ongoing personal injury lawsuit arising from a slip-and-fall accident on the sidewalk outside of a restaurant.

The plaintiff initially filed her personal injury lawsuit against the City of Naples, which she said was liable as the owner of the sidewalk. The lawsuit alleged that negligent maintenance of the sidewalk was the proximate cause of her accident. Later, the plaintiff added the restaurant as a co-defendant, citing its negligence in installing the walkway pavers, which in turn created a “tripping hazard” for pedestrians.

Both defendants denied responsibility for the accident. The restaurant moved for summary judgment on the grounds that it “had no control, ownership and/or role in the construction or maintenance of” the sidewalk. The judge apparently agreed and granted the motion. The plaintiff and the city then jointly appealed that ruling.

The Second District reversed the trial court. It held there was enough of a factual dispute to submit the question of the restaurant’s responsibility for the plaintiff’s accident to a jury. In a premises liability case, the Second District noted, a defendant’s duty of care “is not dependent on ownership of the premises,” but rather whether it has “the ability to exercise control over the premises.”

Slip-and-fall cases are rarely as simple as you might think. They often involve very specific factual questions that require careful investigation and examination. And as the case above illustrates, there may be multiple parties who share in the liability for a given accident.

An experienced Boca Raton slip and fall lawyer can help guide you through this process. So if you have been injured in an accident and need legal advice, Contact Leifer & Ramirez today to schedule a free consultation.

By Leifer & Ramirez | Posted on January 21, 2022
« Comparative Negligence And Florida Wrongful Death Lawsuits
“Who Knew What When?” Is Often The Key Question In Slip-And-Fall Lawsuit »