“Who Knew What When?” Is Often The Key Question In Slip-And-Fall Lawsuit 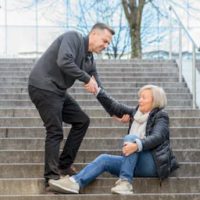 Essentially, if you notice a dangerous condition yet decide to assume the risk anyway, you cannot turn around and argue in court that the defendant’s negligence caused your injuries. In that scenario you had “equal or superior” knowledge of the hazard. But if you were genuinely unaware of the hazard–and you could not have been made aware through the exercise of reasonable care–then the owner could be held responsible.

Determining whether a plaintiff had equal or superior knowledge of a hazard is often a highly specific factual question that cannot be resolved unless a case goes to trial. A recent decision from the Florida Second District Court of Appeals, Conrad v. The Boat House of Cape Coral, LLC, provides a useful illustration. In this case, the appellate court reversed a trial judge’s decision to grant summary judgment to the defense in a slip-and-fall case because there was disputed evidence regarding the plaintiff’s knowledge.

After the fall, the plaintiff saw there was a divot in a broken part of the seawall. This was what caused the plaintiff to lose his footing and fall. The plaintiff later admitted under oath that had he looked at the seawall beforehand, he would have likely noticed the divot. But he said he had used the same dock on six prior occasions without incident. Critically, on those prior occasions the boat was docked at different locations on the deck. The defendant’s employees had elected to dock the plaintiff’s boat at this particular location on the day in question.

The trial court concluded that the divot was “clearly visible and was, or should have been obvious to the Plaintiff.” In effect, the judge agreed with the defendant that the plaintiff was legally responsible for the accident. But the Fourth District said that was a premature conclusion. The appellate court noted the legal issue was not whether the divot itself was “open and obvious” to the plaintiff. Rather, it was whether the divot was “an obviously dangerous condition.” Since the evidence on that point remained in dispute, summary judgment was inappropriate and the Fourth District returned the case for trial.

Slip-and-fall injuries are among the most common causes of serious injuries in Florida. So if you are injured due to a property owner’s negligence in maintaining their property, you have the right to seek compensation. If you need advice from a skilled Boca Raton slip-and fall accident attorney, contact Leifer & Ramirez today to schedule a consultation.

By Leifer & Ramirez | Posted on January 24, 2022
« Can Someone Other Than A Property Owner Be Held Responsible For A Slip And Fall Accident?
What Is A “Himalaya” Clause And How Could It Affect My Personal Injury Lawsuit? »