How Does A Judge Sort Out A “He Said/She Said” Accident Dispute? 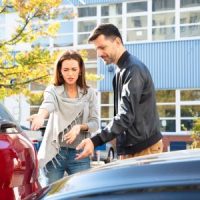 It is fairly common for two drivers involved in an auto accident to blame one another for a collision. In the absence of conclusive evidence such as video footage, it often comes down to the conflicting testimony of the parties. The role of a jury (or a judge in a bench trial) is to weigh all of the available evidence and decide whose story is more likely the correct one.

In some cases, the judge may conclude that there are no disputed material facts requiring a full trial. Defendants in personal injury cases often move for summary judgment, claiming the evidence could only lead to the legal conclusion they were not responsible for the accident. But the mere fact the defense disagrees with the plaintiff’s evidence does not, by itself, call for summary judgment. To the contrary, such disputes often underscore the need for a trial.

The government moved for summary judgment. The main evidence at this stage consists of the conflicting testimony of the two drivers, some photographs taken at the accident scene, and an accident reconstruction report prepared by a government expert. In particular, the government said its expert report was “unrebutted,” as the plaintiff offered no expert testimony of her own.

But as the judge explained in his decision denying the government’s motion, a lack of expert testimony does not by itself justify summary judgment. The government cited cases involving medical malpractice, where the plaintiff does have to present expert evidence to establish their case. Many car accident lawsuits, however, involve no such expert testimony.

Furthermore, the judge noted that the “unrebutted” testimony offered by the government largely relied on photographs taken at the scene. This was not a situation where there was, say, video footage taken from a dashboard camera, which might provide a more complete picture of what happened. Ultimately, this case still largely came down to the conflicting testimony of the two drivers–and the only way to resolve that dispute was to have a full trial on the merits.

There is a great deal of work that goes into a personal injury case before it ever reaches a trial. An experienced Deerfield Beach car accident attorney can guide you through the process and provide you with effective representation in court. Contact the Leifer Law Firm today to schedule a free consultation with a member of our personal injury team.

By Leifer Law Firm | Posted on December 6, 2021
« Is An Arbitration Agreement Enforceable If It Would Be Too Costly For The Plaintiff?
Can I File A First-Party Insurance Claim Even If I’m Not Listed On The Vehicle’s Title? »