Could Wearing Flip-Flops Make You Liable For Your Own Slip And Fall Accident? 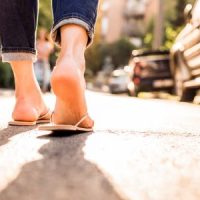 In Florida personal injury lawsuits, the defense may attempt to argue that the plaintiff was partially–or even completely–responsible for their own injuries. This is known as comparative fault. And if the jury assigns even a small percentage of comparative fault to the plaintiff, that can limit the amount of damages that they ultimately receive.

A recent decision from a federal judge in Fort Myers, Mokris v. United States, addressed a question that might be of relevance to many South Florida residents–namely, does wearing flip-flops in a public place mean you are at-fault if you are injured in a slip and fall accident?

This particular personal injury case involved a Post office in Cape Coral. One Saturday in May 2018, the 57-year-old plaintiff in this case went to this Post Office to drop off a letter. It had been raining off-and-on that morning.

As the plaintiff entered the Post Office’s sliding doors, she stepped on a wet tile and fell. After the fall, the plaintiff said she saw a pool of water along the edge of the floor. Although there was a floor mat near the door, it was “too far away from the threshold” for her to have stepped upon, she later testified.

The plaintiff subsequently filed a personal injury lawsuit against the federal government. Such lawsuits are governed by the Federal Tort Claims Act (FTCA). Basically, this means a federal judge must try the case applying state personal injury law.

But as the judge noted, “Wearing flip-flop sandals is common in Florida.” And while it might have been “wiser” to wear different shoes that morning, the mere fact the plaintiff had flip-flops on did not prove she created or assumed any risk of falling. Indeed, the plaintiff’s flip-flops were examined as evidence in this case and the judge said there was no “outstanding characteristic” that made them “inappropriate in general or contributed to her fall.”

The judge ended up awarding the plaintiff $7,247.40 in medical expenses and an additional $50,000 for her pain and suffering.

If you are thinking about filing a personal injury lawsuit, you need to be aware that your own actions may also be put on trial. That is why it is crucial to work with an experienced Boca Raton slip and fall accident lawyer. Contact Leifer & Ramirez today to schedule a free consultation.