Who Is Considered A “Business Establishment” In A Premises Liability Lawsuit? 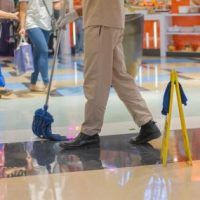 The law specifically governs business establishments, which are not not necessarily the same thing as a property owner. In other words, let’s say you are involved in a slip-and-fall that takes place in a store that rents its space from a strip mall. The store’s owner is still legally responsible for your injuries because it had “the ability to control access or exclude others from the property” in question. Ownership is irrelevant in this context.

Here is another, real-world example of how these principles work. In Leaton v. Flik International Corp., the plaintiff sustained injuries in a slip-and-fall accident that occurred at the corporate headquarters of his employer. Specifically, the plaintiff was walking down a corridor and passed a food station. As the plaintiff passed the food station, he slipped and fell.

The plaintiff subsequently sued the business that operated the food station. He did not sue his employer, the party that actually owned the building. (As an aside, you typically cannot file a personal injury lawsuit against your employer, as such cases are normally covered by workers’ compensation.) In court, the plaintiff further argued that Florida’s premises liability rule requiring actual or constructive knowledge of a dangerous condition did not apply to his claim since the food stall owner was not the property owner.

A federal judge rejected that argument. The judge reiterated Florida’s long standing rule that premises liability is based on the ability to control access and exclude others rather than ownership. Now in this case, the defendant food stall operator did not have “possession or control over the premises.” It provided its services under an independent contractor agreement with the employer. Nevertheless, the judge said that under general principles of tort law, the contractor is “subject to the same liability, and enjoys the same freedom from liability, for physical harm caused” by its activities on the employer’s property.

Turning to the merits then, the judge said the plaintiff could not prove the food stall operator had actual or constructive knowledge of any dangerous condition that led to the slip and fall accident. The judge therefore dismissed the plaintiff’s lawsuit.

If you are injured on another person’s property, it is important to seek out timely legal advice from an experienced Boca Raton retail store injury lawyer. Premises liability claims are often more complicated than you might realize, so it is essential that a qualified attorney review your case and advise you on the best course of action. Contact Leifer & Ramirez today to schedule a free consultation with a member of our personal injury team.

By Leifer & Ramirez | Posted on October 1, 2021
« How Punitive Damages Work In A Florida Personal Injury Lawsuit
What Happens When A Personal Injury Defendant “Loses” Evidence? »