What To Know About Solo-Vehicle Crashes 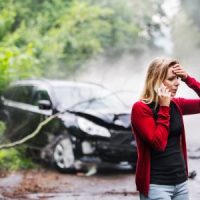 When you think of car accidents, you may think of two or more vehicles colliding with each other. However, not all car crashes have to involve multiple vehicles. Some are solo-vehicle crashes that don’t involve other cars.

Solo-vehicle crashes tend to cause significant property damage. That’s because they are often caused by the car going off the road. The car then hits an object, such as a tree, pole, or guardrail. In some cases, the car may roll over, causing serious injuries as well. A person can suffer broken bones, head trauma, or other catastrophic injuries.

Solo-vehicle crashes can be caused by the following:

Liability in a Solo-Vehicle Accident

In most cases, you’ll be considered liable for a solo-vehicle accident. However, there are some exceptions:

Will Insurance Cover My Damages?

Solo-vehicle crashes often result in major property damage and can cause serious injuries as well. These crashes follow the same rules as other car accidents, so you’ll want to make sure you are following the proper steps.

A Boca Raton auto accident lawyer from Leifer & Ramirez can assist you after a solo-vehicle crash. Learn more about your legal rights and responsibilities. Schedule a consultation by filling out the online form or calling 561-660-9421.