What Happens When A Manufacturer Tries To Shift Blame For Producing A Defective Product? 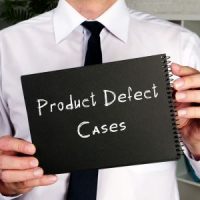 Shifting blame is a common defense tactic in personal injury litigation. When it is clear the plaintiff suffered some injury caused by negligence, the defendant will often try and claim another defendant–or even a third party not named in the lawsuit–is actually to blame. Such blame-shifting can convince a jury to apportion most, if not all, of the fault away from the defendant.

Of course, that assumes the jury ever gets to hear the argument. Depending on the particular case or statutes involved, a defendant may not be in a position to offer an “affirmative defense” based on shifting blame to someone else. As with any issue arising from a lawsuit, there are often very technical rules involved with raising a specific defense that must be followed.

A MDL is different from a class action. In a class action, multiple plaintiffs file a single lawsuit alleging a common injury. An MDL like this one, however, involves a single judge hearing separate lawsuits arising from a common set of facts. The MDL is essentially a way to consolidate pre-trial matters while preserving each individual plaintiff’s right to manage their case.

Here, Judge Rodgers issued a decision with respect to one case in the MDL. The plaintiff, a man named McCombs, filed his particular lawsuit under Alaska law. In response, 3M raised a number of affirmative defenses, including an attempt to shift blame to the federal government. Basically, 3M wanted to argue before a jury that it was the military’s actions that actually caused McCombs’ injuries.

Judge Rodgers barred this defense. He explained that under Alaska law, since the United States Government was not named as a defendant by McCombs, 3M had to show that it would be impossible to do so. 3M noted that the federal government is typically immune from civil lawsuits except where Congress has expressly waived such immunity. That was correct, Judge Rodgers said, but sovereign immunity did not prevent 3M from naming the government as a third-party defendant; the immunity only meant that no judgment could be entered against the government. Since 3M did not actually try to add the government as a third-party defendant, it could not now try to use apportionment as an affirmative defense against McCombs’ lawsuit. However, 3M could still present evidence that it was the actions of government officials in fitting and instructing McCombs on the use of the earplugs that actually caused his injuries.

If you have been harmed by a defective consumer product, it is crucial that you work with an experienced lawyer who can guide you through the litigation process. Contact the  defective products lawyers at Leifer & Ramirez today to schedule a consultation.

By Leifer & Ramirez | Posted on June 1, 2021
« Can A Personal Injury Defendant Exclude Potential Jurors Based On Race?
How Different Laws Can Affect A Defective Medical Device Lawsuit »