The Potential Consequences of School Bus and School Zone Accidents 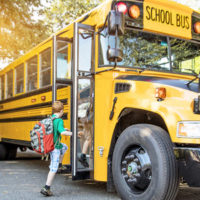 Despite their simple quest to obtain an education, school buses and school zones can be some of the most dangerous places for young children to be in their journey to reach the place where they can obtain this knowledge. And even when motorists attempt to yield to the smallest members of our society, it is, sadly, not only the children who can be placed in danger.

The News-Press recently reported that a 59-year-old man has died after being struck by a driver who reportedly swerved to avoid a stopped school bus. Traffic had begun to slow to a stop because of the stopped school bus and at least three vehicles were involved in the collision that caused one of them to veer into oncoming traffic. Multiple people were reportedly injured and at least one fatality resulted from the collision.

While it is not only children who face potential risks in school zones and around school buses, they face the greatest risk of harm.

How Common Are These Incidents?

The results of a study undertaken by the National Highway Traffic Safety Administration yielded results that no parent or caregiver would want to contemplate. Almost 150 young pedestrians have reportedly died in school transportation related crashes since 1998. Of these fatalities, almost 70 percent involved school buses and another 24 percent happened because of other vehicles involved in the crashes in circumstances that were probably similar to the recent event mentioned above.

What is the Law for Stopping for a School Bus?

Under Florida law, drivers are required to stop for a school bus that has its lights flashing barring other circumstances, such as the driver in question traveling on a divided highway in the opposite direction of a bus when there is also a minimum of five feet of unpaved space, a physical barrier, or a raised median separating the driver from the road where the bus is stopped. Even then, while it may be legal to travel at a higher speed, drivers should continue to pay close attention. Outside of the potential criminal and civil ramifications that could result, no one wants the emotional burden of having caused harm to a child.

What is the National Announcement Intended to Combat this Problem?

The National Highway Traffic Safety Administration recently urged motorists in a press release to exercise caution and follow State laws when approaching a school bus or school crossing in response to a string of recent tragedies in several states, including here in Florida. Both individuals and the media have been charged with helping to educate communities on ways to ensure all students arrive to and from school safely.

We understand how scary it can be when one of the smallest members of your family is injured and we sympathize with what you and your family have experienced. The good news is that there is a good chance that you are entitled to recover from the responsible parties. The Boca Raton car accident attorneys of Leifer Law Firm have helped many people pursue the compensation that they deserve during our 25 years of combined experience and we can help you hold the responsible parties responsible. Contact us today for help.