The Challenges Of Proving “Constructive Notice” In A Personal Injury Lawsuit 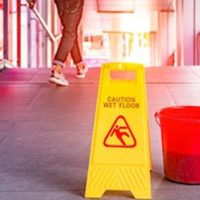 Slip-and-fall accidents usually occur because of a spill or substance on the floor of a business establishment. Under Florida law, the business owner may be legally liable for such an accident if they had “actual or constructive knowledge” of the spill or substance and failed to take proper corrective action. Constructive notice in this context means that even if the plaintiff cannot prove the defendant actual knowledge, there is still sufficient evidence for a jury to infer knowledge based on either (1) the amount of time that the substance was on the floor or (2) the spill or condition was a recurring or ongoing problem to the point where it should have been foreseeable by the owner.

As with all other aspects of a personal injury case, the burden of proof is always on the plaintiff, i.e., the victim who brings the lawsuit. Slip-and-fall claims involving constructive notice often prove particularly challenging to plaintiffs. Indeed, as one recent decision by the Florida Fourth District Court of Appeal illustrates, even a victory at trial may later be reversed due to insufficient evidence.

In this case, Speedway, LLC v. Cevallos, the plaintiff was refilling the gas in her car at a gas station owned by the defendant. As the plaintiff finished pumping her gas, she stepped around the pump and slipped and fell. The cause of the fall was not in doubt: There was a puddle of oil and has left behind by a car belonging to a previous customer.

The plaintiff sustained serious injuries in the fall and subsequently filed a personal injury lawsuit against the defendant. Surveillance video of the gas station established the spill existed for 111 seconds prior to the plaintiff’s fall. The judge agreed and issued a directed verdict for the defense on the question of actual notice. But the judge said the plaintiff could present her theory of constructive notice to the jury. Essentially, the plaintiff’s theory was that due to the defendant’s poor maintenance practices, there had been a “buildup” of oil and gas over time on the concrete near the gas pumps, and that this was sufficient to establish constructive notice.

The jury ultimately ruled in favor of the plaintiff on that issue and awarded her damages. On appeal, however, the Fourth District reversed and entered judgment for the defendant. The appellate court held the plaintiff failed to prove “that buildup actually occurred at the time and location of her fall and that it contributed to her fall.” The plaintiff did introduce photographs taken of the spot, but the Fourth District said the images were “ambiguous” and only showed there was “discoloration” on the concrete; they were not enough for the jury to infer there had been a buildup that would “create a slippery condition.”

In any slip-and-fall case, it is critical to conduct a thorough investigation of all available facts before heading into court. You might assume that the defendant’s negligence will be obvious. But in an actual trial, the judge and jury will need to see concrete evidence. So if you have been injured in an accident and need legal advice from a qualified Boynton Beach slip and fall accident lawyer, Contact Leifer & Ramirez today.

By Leifer & Ramirez | Posted on February 4, 2022
« How Does Occupation Accident Insurance Work?
Is A Delivery Service Responsible For The Death Of A Person Killed By One Of Its Drivers? »