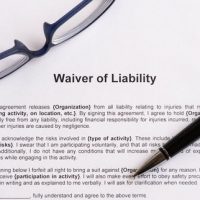 When participating in sports or other organized recreational activities, you are often asked to sign a release form. This is basically a legal document that waives your right to sue the organizer if you are injured during the activity in question. In some cases, however, a liability release may be unenforceable. For instance, if the terms of the release were vague or the type of injury you sustained was not explicitly covered by the terms, a judge may still allow you to proceed with a personal injury claim.

That being said, Florida courts still tend to err on the side of enforcing liability waivers and releases. Take this recent decision from the Florida Fourth District Court of Appeals, Elalouf v. School Board of Broward County. This case involved a high school athlete injured while playing on his varsity soccer team. Specifically, another player allegedly hit the plaintiff during a play, throwing the plaintiff “into an unpadded cement barrier near the soccer field.”

The plaintiff sued the local school board, alleging that it was negligent in leaving the concrete block “so close to the soccer field,” thereby posing a safety hazard to the players. In response, the school board said the plaintiff and his father had previously signed a liability release as a condition of participating in high school sports.

A trial court agreed with the school board that the signed release barred the plaintiff’s lawsuit. On appeal, a divided three-judge panel of the Fourth District agreed with the trial court. The majority noted the terms of the release were “unambiguous and enforceable.” Indeed, the release said absolved the school board of liability from “any injury or claim resulting from … athletic participation.”

The dissenting judge, however, argued the release “did not clearly and specifically release the [school board] for the negligence which occurred in this case.” That is to say, the release explained in bold type that there “are certain dangers inherent in the activity which cannot be avoided or eliminated” for which the school board could not be held responsible. Critically, the dissenting judge said, this language “did not clearly and specifically release negligence.” And while there was the additional language noted above with respect to “any injury or claim,” that was “in tiny print” and created an ambiguity as to what the release actually covered.

As you can see, even professional judges can look at a liability release and disagree about its actual meaning. This is why you always need to be careful when signing such forms. You may be signing away valuable legal rights without even fully realizing the implications of your actions.

If you have been injured on someone else’s property or due to someone else’s negligence, it is important you seek out legal advice from a qualified Boca Raton personal injury lawyer. Contact Leifer & Ramirez today to schedule a consultation with a member of our team.

By Leifer & Ramirez | Posted on February 19, 2021
« Understanding Third-Party Liability in a Personal Injury Case
How Auto Accident Negligence Laws Differ Between Florida and Its Neighboring States »