Another Deadly Rollover Crash on the Florida Turnpike 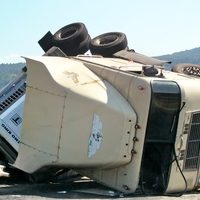 A vehicle rollover is a dangerous accident, as an August Rollover Crash on the Florida Turnpike demonstrated. The vehicle, a sport utility vehicle blew a front tire while traveling northbound, overturned in the median and then rolled over into the southbound lane.

Four of the occupants were ejected, none of whom were wearing seatbelts. One occupant was killed and the Florida Turnpike was closed for more than three hours, leading to an eight-mile backup, according to the Florida Highway Patrol.

This fatal crash is typical of a rollover. A vehicle can lose stability, roll multiple times and possibly eject some of the occupants, which can result in their deaths.

Rollover crashes were first highlighted with the Ford Explorer-Firestone tire issue of the 1990s. The narrow stance and high center of gravity of the Explorer made it prone to rollovers and this was exaggerated by the behavior of the Firestone tires it was equipped with.

Many rollovers occur when the tires begin to slide on the road surface and then hit a curb or other raised obstruction, which triggers the rollover as the vehicle tips. This can occur due to defective tires or poorly maintained tires, road surface condition and driving too fast.

Fatal rollover crashes are often speed-related. According to National Highway Traffic Safety Administration, 40 percent of fatal rollovers involved speeding, and more than three-quarters occur on high-speed roads, where the speed limit was 55 mph.

Injured due to Rollover Crash on the Florida? You need a primary car accident lawyer to fight for your right. Call us at 561-660-9421 for a FREE consultation.

By Leifer Law Firm | Posted on September 10, 2012
How Is Your Florida Teenager Driving? »