13 Children Injured In Crash Between School Bus And Semi-Truck 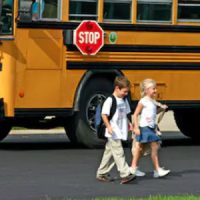 In what is surely every parent’s worst nightmare, 13 Florida children have sustained injuries in a crash that occurred between a school bus and a commercial semi-truck. The accident occurred on US 29 where it intersects with Nine and a Half Mile Road in Escambia County, Florida. The bus had 28 children on board, 13 of whom suffered injuries as a result of the collision. According to police who responded to the scene, the school bus was rear-ended by a commercial semi-truck at the intersection of Nine and a Half Mile Road and US 28. 13 children received medical treatment as a result of neck and back injuries which officers said were primarily minor in nature. The police have not yet commented on what caused the commercial semi-truck to rear-end the school bus or whether any negligence was involved in the crash. Officers have also not said whether any charges will be brought against the truck driver or their employer. The investigation into this accident remains ongoing. No further updates on the wellness of the children have been provided at this time.

Have You Been Injured in a Florida Bus Accident?

Busses are common carriers, which means that they have a higher duty of care than other drivers on the road. Of course, this does not make them immune from accidents. Buses are at risk of being involved in accidents just like everyone else on the road. Unlike other vehicles on the road, however, bus passengers do not wear seatbelts, and passengers on transit buses are often standing. This dramatically increases the chances of severe injury in cases where buses are involved in collisions. If you or your child have been injured in a Florida bus accident, you may be entitled to compensation for the harm that you have suffered. In order to succeed in your claim you will have to show that another party was negligent in causing the harm that you suffered. The negligent party may have been the bus driver, owner, county, city, bus manufacturer, or a manufacturer of one of the parts or components of the bus, among others. The best thing to do if you have been injured in a Florida bus accident is to consult with an experienced personal injury attorney as soon as possible. Your attorney will review the facts of your case in order to determine any potentially liable parties as well as to get a sense of what damages you may be entitled to.

If you have been injured in a Florida bus accident, contact the experienced personal injury attorneys at Leifer & Ramirez in Boca Raton to learn more about your legal options. Our attorneys will review the facts of your case and determine the best path forward to ensure that you get the maximum amount of compensation for the injuries you have suffered due to someone else’s negligence. Contact our car accident lawyers today to schedule a consultation. We serve clients in Fort Lauderdale, West Palm Beach, Delray Beach, Boca Raton, Boynton Beach, and communities throughout Florida.