Who Is Responsible if You Get Sick on an Airline? 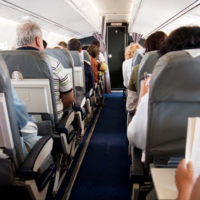 Passengers on a flight from Cleveland to Tampa fell ill on a Frontier Airlines flight resulting in health officials boarding the plane when it landed in Tampa. The sick passengers were taken off the flight and are being held for observation. The six passengers who were ill were not traveling together.

The rest of the passengers were kept on the airplane for about an hour after it touched ground. A representative for the airport said it is possible that the passengers who fell ill were drinking from the same fountain. The fountains in the concourse of Frontier Airlines has been shut down as a safety precaution. The illnesses remain under investigation.

Because airlines are considered common carriers, they typically owe their passengers a relatively high duty of care. This means that if a passenger claims that he or she was injured by contracting some type of contagious disease during the course of the flight, including suffering emotional distress caused by the exposure of the disease, the passenger would likely have to establish a breach of that duty of care and that the breach resulted in their injury.

While there isn’t a lot of case law when it comes to airline liability for passengers who contract a communicable disease while in flight, a negligence claim against an airline may be able to be based on several different scenarios including, but not limited to, the following:

Whether an airline would be held responsible for a passenger contracting a communicable disease would ultimately depend on whether the airline had prior knowledge of the illness, whether they should have suspected or known there was a health risk, and how they responded to the situation once they became aware of it.

If you or your loved one has suffered an injury or illness while flying that you believe may be due to the failure of the airline to act in an appropriate manner, you may be entitled to collect compensation for those injuries or illness. The Florida attorneys at Leifer Law Firm will help you determine the best course of action to take for your situation and work to ensure that your rights are protected. Contact us at one of our conveniently located Florida offices and schedule a consultation today.