How Do Third-Party Bad Faith Insurance Claims Work In Florida? 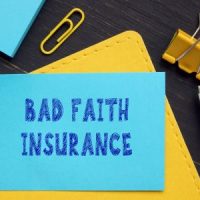 An insurance company has a legal duty to act in “good faith” when settling a claim. In the context of a car crash, for instance, an insurer cannot drag its feet or refuse to settle a claim when it knows their insured driver caused the accident. Florida law even permits the accident victim to pursue a third-party claim against an insurance company that acts in bad faith.

Whether or not an insurer has acted in bad faith, however, is based on the “totality of the circumstances.” An insurer is only required to act as a “reasonably prudent person” would in similar circumstances.

A recent decision from the U.S. 11th Circuit Court of Appeals, Eres v. Progressive American Insurance Company, illustrates how courts apply these standards. This tragic case involved a 2007 accident caused by a drunk driver. The plaintiff was traveling with her son. Their vehicle was stopped at a railroad crossing in Pasco County. The intoxicated driver then slammed into the plaintiff’s vehicle, pushing it into an oncoming train. The resulting collision killed the plaintiff’s son and left her with permanent injuries.

Progressive was the drunk driver’s insurance company. According to the 11th Circuit’s opinion, the insurer “sought to settle matters quickly” with the plaintiff. Four days after the accident, Progressive offered to payout the limit of the policy, which was $20,000 for both victims. The plaintiff’s attorney advised Progressive the plaintiff was not yet ready to receive the checks, as there was still a pending criminal case against the drunk driver and unresolved probate issues involving her deceased son’s estate.

After the drunk driver pleaded guilty to criminal charges, the plaintiff, now represented by a different attorney, informed Progressive it was ready to settle. The attorney specified a number of conditions for any settlement, including that any release be limited to the drunk driver only and not include any “hold harmless or indemnity agreement” for other parties. In response, Progressive sent a $20,000 check and its own proposed release, which the plaintiff’s attorney considered a counter-offer and rejected.

The plaintiff proceeded to file a personal injury lawsuit in Florida state court against the drunk driver. She obtained a $10 million judgment. The Florida Second District Court of Appeals subsequently upheld the verdict and rejected Progressive’s argument that it had “settled the claim” through its prior $20,000 offer. The Second District agreed with the plaintiff that the counter-offer contained language that amounted to a “hold harmless or indemnity agreement,” which the plaintiff said she would not accept.

The plaintiff then filed a third-party bad faith lawsuit against Progressive, seeking to collect her $10 million judgment. Progressive transferred the case to federal court. A federal judge ultimately dismissed the lawsuit, and on appeal the 11th Circuit affirmed. Considering the “totality of the circumstances,” the Court of Appeals said Progressive acted as a “reasonably prudent person” would have when faced with the same situation. In particular, the 11th Circuit said Progressive did not have the benefit of the Second District’s opinion when it made its original counter-offer. At worst, the Court said the insurer might have been negligent in failing to check the language of its counter-offer before sending it to the plaintiff–but that did not amount to bad faith.

Dealing with insurance companies is often a major headache for accident victims. An experienced Delray Beach car accident lawyer can guide you through the process of seeking any benefits you are entitled to under the law. Contact the Leifer Law Firm today to schedule a free initial consultation.

By Leifer Law Firm | Posted on August 30, 2021
« Understanding The Use Of Expert Testimony In Personal Injury Cases
Is An Employer Responsible For A Car Accident Caused By An Employee During A Business Trip? »