What Determines the Value of a Traumatic Brain Injury Claim? 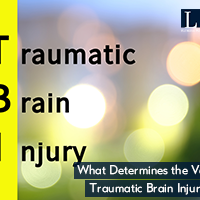 Prior to the NFL class-action suit, the danger of TBIs was not as well publicized, because though athletes had always suffered concussions, it seemed like a normal part of playing a contact sport.

That’s no longer the case, as more and more athletes are revealing permanent brain damage from what they believe were repeated TBIs that were either improperly diagnosed, improperly treated or completely ignored.

According to the Centers for Disease Control and Prevention (CDC), an estimated 1.7 million people in the U.S. suffer a TBI each year, and 52,000 people die as a result of a TBI.

Annually, 30 percent of deaths related to injury in the U.S. are caused by a TBI, and concussions account for a whopping 75 percent of all TBIs.

Clearly, TBIs have become a big problem, and that’s triggering an increase in legal claims related to these types of injuries.

But before diving into how the value of a TBI claim is determined, it is first important to understand what these injuries are and how they are caused.

When a person suffers a TBI, it refers to any kind of disruption of the function of the brain, typically as the result of some type of trauma to the head like a blow, a jolt, a bump or another type of blunt force.

The key aspect of a TBI is that it negatively affects the brain’s normal function, even if it is only for a few minutes.

But despite these three categories, doctors caution anyone who suffers from a TBI that ‘mild’ is simply a term used to describe neurological impairment, and that every TBI should be taken seriously. The reason is that any type of TBI short-circuits the way the brain functions and sends out messages.

Even a mild TBI can set the stage for a much worse brain injury if a person suffers a second head trauma.

The most common causes of TBIs are falls, car accidents, assault, and head trauma through some type of activity – such as playing a sport.

When people fall, they often lose their ability to cushion that fall, and if they strike their heads against a hard surface, that can easily generate enough force to cause a TBI.

That is also the case when a person is involved in a car accident caused by another driver that results in head trauma.

But TBIs are also problematic when it comes to an assault during a fight, because a fist or another type of weapon striking a person’s head can cause a mild, moderate or severe brain injury.

What Determines the Value of a TBI Claim?

An assault that causes a TBI is a prime example of the type of behavior that is legally actionable. But there are a number of different factors that determine the value of your TBI claim, including:

Recovering Your Peace of Mind

It’s no secret that public awareness of TBIs is at an all-time high due to the issues related to concussions and the National Football League. And with that awareness, people are more knowledgeable when it comes to liability regarding these types of injuries. If you or someone you love has suffered a TBI that was caused by third-party negligence, you may be entitled to compensation for medical bills, pain and suffering and loss of income.

But to ensure that you obtain rightful compensation, you need to hire an experienced law firm, such as the team at Leifer Law. We have spent years handling these types of claims, and we understand the complexities involved in pursuing legal action for negligence. Please call us today at 561-660-9421 for a free legal consultation.

How Car Accident Related TBIs Can Impact Your Sleep

By Leifer Law Firm | Posted on September 29, 2017
« What You Need To Know About Teen Drivers and Personal Injury Claims In Boca Raton
How To Avoid Car Accidents In Boca Raton »