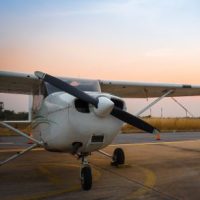 Private jets may be the fanciest way to travel, but they are certainly not the safest. Weather conditions have been contributing to a rash of recent accidents involving twin-engine aircrafts. In the most recent accident, two such airplanes were flipped over by winds at a Florida airport. One of the planes was empty at the time so no one was injured, however, there were two occupants in the other plane. One of the occupants was declared dead at the scene of the accident while the other one was seriously injured and had to be transported to a local hospital for treatment. The airplane can be seen upside-down on the runway. Authorities have not commented further on the current condition of the injured occupant or whether any additional factors contributed to causing the accident. Just days ago, police announced that they had located a small plane that crashed in a remote area of central Florida. Both the pilot and passenger on board were killed. That accident remains under investigation and it is not yet clear what caused the plane to crash. This is on the heels of an accident that occurred in Osceola County less than a week ago in which a small private plane crashed in a marshy area, injuring three people on board.

Can I Sue for a Private Plane Accident?

In order to determine whether you have standing to bring a personal injury lawsuit for a plane crash the question that you have to answer is whether any negligence occurred. Plane crashes and accidents can happen in the absence of negligence, such as where inclement weather and strong winds simply flip it over or kick it out of the sky. However, if the pilot was negligent in flying despite a bad weather forecast you may still have a case. The owner of the plane may also have been negligent in maintaining it, or there may have been defective parts of the plane that caused its equipment to malfunction and fail during flight. In short, if you have been in a plane crash, there is a good chance that negligence was involved in some way. In order to succeed in your personal injury claim you will have to establish that at least one other party (such as the owner of the plane, pilot, manufacturer, etc.) was negligent in causing or contributing to the accident. You will also have to show that their negligence resulted in the accident and your injuries, and that your injuries were both physical and financial in nature.

Schedule a Consultation with Leifer & Ramirez

If you have been injured in a Florida plane crash that was caused by someone else’s negligence, you are entitled to damages for the pain, suffering, and financial loss that you have experienced as a result. Contact the experienced personal injury lawyers at Leifer & Ramirez today to schedule a consultation and find out how much your claim might be worth. We serve clients in Fort Lauderdale, West Palm Beach, Delray Beach, Boca Raton, Boynton Beach, and communities throughout Florida.

By Leifer & Ramirez | Posted on January 20, 2023
« How To Talk To An Insurance Claims Adjuster After A Car Accident
Bringing A Claim For Car Accident Dental Damage »