Why You Should Stop Running Red Lights 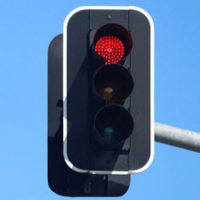 Every driver knows that you aren’t supposed to run red lights because doing so is against the law. However, there is another aspect – running red lights can be extremely dangerous and lead to tragic results as outlined in a recent news story.

The Palm Beach Post recently reported that a 21-year-old driver caused a fatal accident when he raced through two red lights on a recent Friday night and killed a man. The driver was behind the wheel with a suspended license and is suspected of having been drunk when he struck the driver’s side of the victim’s car. A local police officer reportedly saw the driver’s SUV traveling at a high rate of speed with its headlights off prior to the accident and was in pursuit of the vehicle. Witnesses later said the SUV appeared to be fleeing the police car at about 90 mph as it went through the red lights.

How Common is Red Light Running and Why is it Problematic?

The Insurance Institute for Highway Safety has reported that sadly, red light running happens frequently and as the recent example in the news indicates, it is often deadly. In 2017 alone, almost 900 people were killed in crashes that involved red light running and an estimated 132,000 people were injured. It is easy to understand why these crashes are especially dangerous in populated areas with busy intersections; drivers who run red lights are likely to strike another vehicle in the side. According to the AAA Foundation’s latest Traffic Safety Culture Index, 28 percent of crash deaths that occur at signalized intersections are the result of a driver running through a red light.

Why Do Drivers Run Red Lights?

Despite us all understanding that running red lights carries risks, it is clear that drivers continue to engage in this risky behavior. The AAA Foundation’s latest Traffic Safety Culture Index also indicates that 85 percent of drivers view red light running as very dangerous, yet nearly one in three say they blew through a red light within the past 30 days when they could have stopped safely. More than 2 in 5 drivers also say it is unlikely they’ll be stopped by police for running a red light. The reasons why drivers run red lights vary with individual circumstances but can include factors such as:

Have You or a Loved One Been Injured Because a Driver Ran a Red Light?

If you were injured in a crash caused by a driver who ran a red light, you should talk to an experienced personal injury attorney about your legal options as soon as possible. As the South Florida at Leifer & Ramirez, we offer well over two decades of combined experience handling personal injury cases throughout the Sunshine State. We will fight to hold those responsible for your loss accountable and win compensation to cover medical bills, lost wages, and pain and suffering. Contact us today to begin.