Who Exactly Are First Responders? 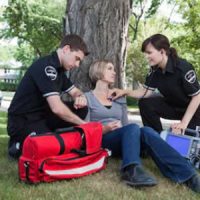 Local 10 News recently reported that a teenager was finally able to meet the people who saved his life after a horrific crash last April. The 19-year-old lost control of the Chevy sedan he was driving after he hit another car. His vehicle then slammed into a tree and immediately burst into flames while the young man was still trapped inside. In what is probably fortunate, he was unconscious when the crash happened and does not remember anything. However, after two months of being treated at Kendall Regional Medical Center for severe burns to his hands and legs, he has now been able to personally thank those who he credits with having his life. Additionally, some of the many first responders were also honored by a local homeowners association in a recent ceremony.

Emergency care on the scene of an accident can clearly have a life-saving effect for severe for the most severe of injuries. With injuries they perceive as comparatively less severe, people often do not take advantage of first responders and the aid they offer. However, anyone who is involved in an accident should understand that the medical treatment that you do – or don’t – receive following an accident can be extremely important later on.

Who Are the First Responders That May Arrive on the Scene?

When you or someone else calls 9-1-1 after you are involved in an accident, you will receive emergency services from those individuals who arrive at the accident scene first – also known as first responders. When first responders arrive, they serve a few different roles. These roles include:

Even if you don’t think your injuries are serious enough to obtain help on the scene of the car, make sure that you visit an urgent care center or your primary doctor as soon as possible after that. Minor injuries may not immediately be apparent to you but that doesn’t mean they are not there. Additionally, obtaining treatment earlier on can help you later substantiate your personal injury claim.

Are You Trying to Understand Your Medical Treatment in Regard to Your Personal Injury Claim?

It is imperative that anyone who is injured in a car accident understands that the doctors and medical treatment that you do or don’t receive following your accident can affect every aspect of a personal injury claim. As the South Florida personal injury attorneys at Leifer Law Firm, we are skilled and experienced personal injury lawyers who represent clients every day in personal injury claims. We can help guide you through this process and ensure that you undertake the correct steps to obtain the compensation that you deserve. Contact us today.

By Leifer Law Firm | Posted on January 3, 2020
« Staying Safe Around Space Heaters
The Effects of Paralysis After a Car Accident »