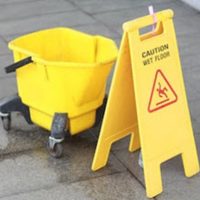 Constructive knowledge can be established through circumstantial evidence. A recent decision from a federal judge in Miami, Thompson v. Wal-Mart Stores East, LP, provides a helpful illustration. In this case, the court denied the defendant’s motion for summary judgment on the question of whether it had constructive knowledge of a puddle of water that caused a customer’s slip and fall.

The accident in question occurred at a Wal-Mart store in Pembroke Pines, Florida. It had been raining that day and, according to the testimony of the plaintiff and other witnesses, was still drizzling when the plaintiff arrived to shop. After paying for her purchases and while walking towards the exit, the plaintiff’s leg suddenly “slid forward” and she fell onto the floor.

The plaintiff testified that she observed a “footprint” and a “skid mark” where she slipped. Subsequent photographs taken of the area also revealed “multiple marks and streaks” in the area. Wal-Mart’s own security camera footage showed “dozens of customers and Wal-Mart employees passing through the area” just before the plaintiff’s accident, according to court records.

The plaintiff subsequently filed a personal injury lawsuit against Wal-Mart. As previously mentioned, Wal-Mart moved for summary judgment. It maintained that even viewing the available evidence in the light most favorable to the plaintiff, she could not prove the store had constructive knowledge of any puddle of water or any other substance that caused the plaintiff’s fall.

The judge disagreed. Without ruling on the merits of the case, the judge concluded that a jury could find constructive knowledge based on evidence that water had been accumulating in the spot where the plaintiff fell for some time, as well as the security footage, which showed multiple Wal-Mart employees walked by the area without inspecting the floor, despite the fact it was a rainy day.

While there is no specific amount of time that a spill or hazard must be present before a jury can impute constructive knowledge to a defendant, the judge said the facts presented here were “more than sufficient to raise a reasonable inference that the water had been there long enough for the employees to have spotted it.”

A slip-and-fall accident can leave you struggling to earn a living and pay your mounting medical bills. So when a store owner’s improper maintenance led to your fall, you have the right to seek compensation. If you need legal advice or representation from a skilled Boca Raton slip and fall accident lawyer, Contact Leifer & Ramirez today to schedule a free consultation with a member of our personal injury team.

By Leifer & Ramirez | Posted on March 9, 2022
« The Perils Of Rejecting “Stacking” UM Coverage For Your Auto Insurance Policy
Is An Auto Dealership Liable For An Accident Cause By A “Loaner” Vehicle? »