The Danger of Motorcycle Accidents: Especially In Florida 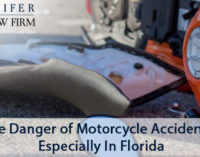 According to the National Highway Traffic Safety Administration (NHTSA), motorcyclists are much more likely to be involved in a crash than operators of passenger cars. More than 55,000 people are injured and more than 2,200 people are killed each year due to motorcycle accidents.

Most people know that motorcycles are inherently more dangerous than cars. Without an outer structure to protect the body from the impact of a crash, motorcyclists are far more vulnerable than drivers of cars and trucks.

With this in mind, here are some facts about motorcycle accidents that may shock you:

Also Read: Do You Know the Common Motorcycle Accident Facts?

Florida Ranks Number One in the Nation for Fatal Motorcycle Accidents

Beautiful weather comes at a price, especially for motorcyclists in Florida. When it comes to motorcycle accident deaths, Florida leads the entire nation, with motorcyclists accounting for almost 20 percent of motor vehicle fatalities.

According to a recent survey conducted by AAA Consumer Pulse, even though the economic costs of each motorcycle fatality is over $1.4 million, nearly 20 percent of motorcyclists do not have insurance. These economic costs include property damage, medical costs, legal and court fees, emergency service costs, insurance administration costs, work losses, and loss of productivity.

The survey also asked members of the public if motorcyclists should be required to wear helmets while riding. Although 15 percent of those surveyed said no, it’s refreshing to know that 85 percent answered yes. Among motorcyclists, however, these numbers are lower, with 32 percent of Florida motorcyclists saying they do not support mandatory helmet laws.

Florida leads the nation in motorcycle related accidents, and these numbers show no indication of decreasing.

If you or a loved one has been injured in a motorcycle collision, call a Boca Raton motorcycle accident attorney today. The experienced personal injury attorneys at The Leifer & Ramirez can help you get the personal attention and compensation you deserve.

By Leifer & Ramirez | Posted on September 29, 2016
« Are Autonomous Trucks Going to Be the Wave of the Future?
Deer Responsible for Causing Significant Numbers of Vehicle Crashes Across the United States »